Barbara Vezzoni graduated in 2006 in Nuclear and Industrial Safety Engineering from University of Pisa (Italy) with a Master in collaboration with SCK-CEN, Mol (Belgium). In 2007, she obtained the EMSNE (ENEN) certificate and in 2011, she got her Ph.D. from the University of Pisa (Italy) with a thesis on Transition Nuclear Fuel Cycles from LWRs to Gen-IV Reactors carried out in collaboration with the Karlsruhe Institute of Technology (KIT, Germany).

In the period 2009-2017, she worked as full researcher at KIT (Germany) and she was involved in few international activities related to several reactor concepts (FR, LWR, SMR, FFHR, ADS, ..). She contribute to several EU projects (LWR-DEPUTY, CP-ESFR, ARCAS, PELGRIMM, MARISA), to the AFCS OECD/NEA Expert group (senior member since 2013 in charge of fuel cycle and scenario calculations) and to the IAEA CRP on EBR-II (chief scientific investigator for Germany for neutronics and neutronics/thermal hydraulic calculations). During this period, she co-published 9 peer review papers and more than 40 congress papers.

Since April 2017 she joined the neutronics codes development and validation team of Framatome (Paris, France). At present, she is in charge of Framatome technical and strategic coordination of the EDF/CEA/Framatome collaboration project dedicated to neutronics (codes, nuclear data, experiences and applications), she is deputy coordinator of the Advanced Neutronic Schemes project of the new EDF/ Framatome core calculation chain and she is contributing to the activities of the H2020 CAMIVVER project.

Stefano Monti is the Head of the Nuclear Power Technology Development Section in the Department of Nuclear Energy of the International Atomic Energy Agency in Vienna. The Section provides support to Member States and stakeholders for the technology development and deployment of advanced nuclear reactors, including Small Modular Reactors, as well as non-electric applications of nuclear power, including hydrogen production, district heating and water desalination. For more than 35 years Stefano has been working on and coordinating several national and international projects and programs on advanced nuclear systems and related fuel cycles. Before joining the IAEA, as Director of Research at the Italian ENEA, he was Head of the Division Reactor and Fuel Cycle Safety and Security Methods, and Scientific Coordinator of the Italian R&D program on nuclear fission. From 1999 to 2007 he was scientific advisor to the President of ENEA, Nobel Laurate prof. Carlo Rubbia. From 2007 to 2013, he was President of the SIET company, an Italian SME carrying out safety tests to support the safety case of advanced reactors and SMRs. In 2019 he was the co-Scientific Secretary of the first International Conference on Climate Change and the Role of Nuclear Power. Dr. Ing. Monti has been serving in a number of national and international nuclear committees, including the Board of Directors of the Italian National Institute for Nuclear Physics INFN, the Steering Committee of the OECD Nuclear Energy Agency, the Executive Committee of the European Sustainable Nuclear Energy Technology Platform. 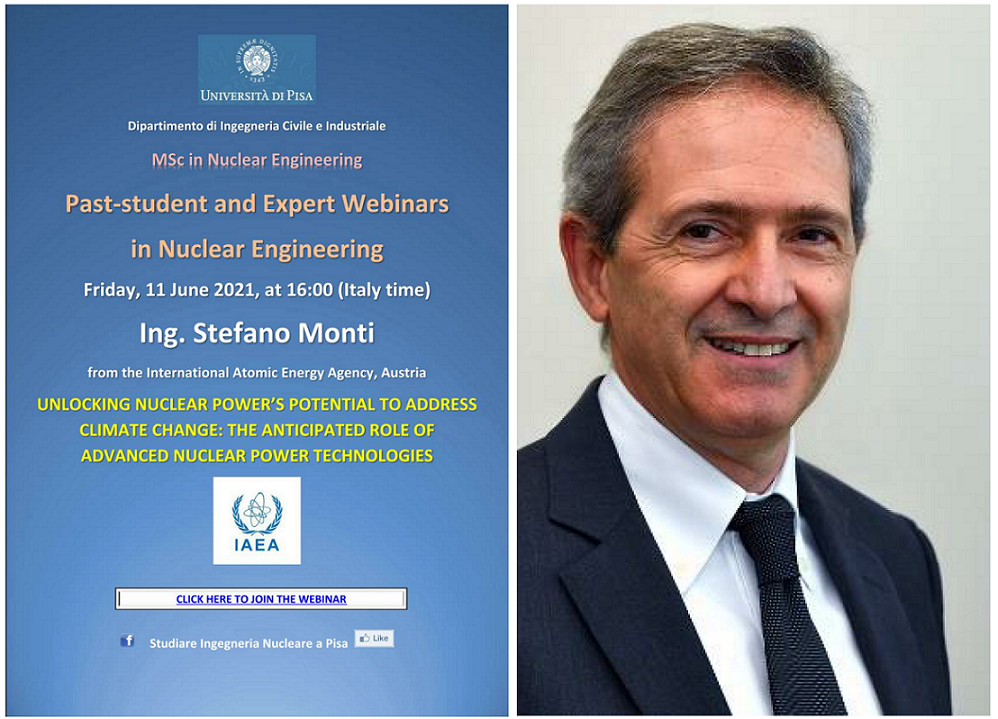