A joint Italian – French study has identified one of the mechanisms through which plants protect themselves from overexposure to sunlight by transforming the energy into heat. The research carried out by the Universities of Pisa and Nantes has been published in the Nature Communications journal. The study, conducted mainly at the Department of Chemistry and Industrial Chemistry in Pisa, paves the way for new genetic strategies to adapt plants to unfavorable environments and optimize crop productivity in reply to the current climate change.

“There are various mechanisms that plants use to defend themselves from the excess light which may damage them by destroying cells but they are not entirely clear to date,” says Professor Benedetta Mennucci from the University of Pisa. “Through computer simulation based on calculations using quantum mechanics, we have been able for the first time to identify a molecular mechanism of energy dissipation which involves specific proteins called ‘antennas’.” 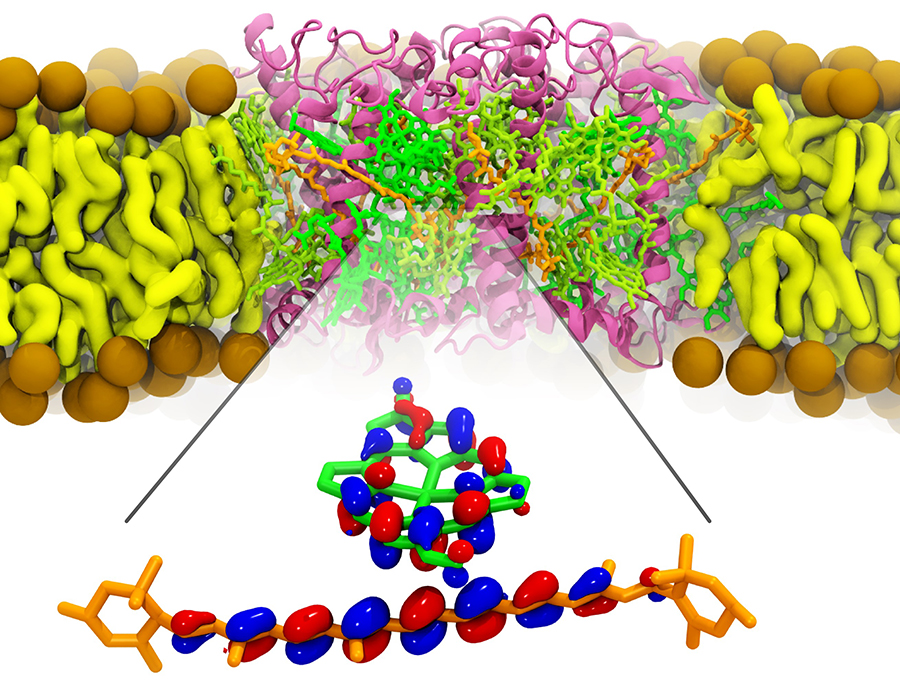 A molecular model of the antenna protein embedded in a membrane; below, the two pigments involved in the dissipation mechanism.

The researchers showed that the ‘antenna’ proteins use a special pair of pigments, one being chlorophyll and the other a derivative of carotene, called lutein. It is in fact the latter which by donating an electron to the chlorophyll, quickly ’turns off’ the excited electron and then dissipates the energy in the form of heat.

“In order to survive, plants need to dissipate excessive energy, but in doing so reduce the efficiency of photosynthesis,” explains Lorenzo Cupellini, a researcher at the University of Pisa. “Our calculations show how the proteins are able to control dissipation mechanisms accurately. In fact, by generating electric fields and imperceptibly modifying the positions of the pigments, the proteins manage to activate or deactivate the mechanism completely, allowing the pigments to capture all the energy available.”

Professor Mennucci’s research team has been using computational techniques for years to study the processes of capturing light in photosynthetic systems. This research published in Nature Communications was funded by the European ERC Advanced Grant LIFETimeS project, coordinated by Professor Benedetta Mennucci. Using molecular models and computer simulations, the project undertakes to explain the mechanisms through which proteins sense, use and reply to light. Dario Calvani, at that time a postgraduate student in the Department of Chemistry and Industrial Chemistry at the University of Pisa, and Denis Jacquemin, a professor at the University of Nantes also participated in the study.