Space, time and numbers in the brain

A strong connection at the visual perception level: the Vision Lab research 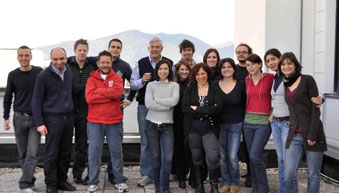 Space, time and numbers are correlated in our sense perception in a much higher measure than is usually thought. The inter-University project known as 'S.T.A.N.I.B.' (Space, Time and Numbers in the Brain) created by the Pisa Vision Lab, is a 5 year project which, in a decisively innovative way, investigates our way of perceiving space and time by considering them together and not as two independent and separate dimensions. The strong connection, which resounds in the tradition of physics both ancient (Aristotle) and contemporary (Einsteinian concept of space-time) is new for studies on perception.

How do we build our visual map of the world?

"At the centre of our research" recalls Maria Concetta Morrone, Professor of Physiology at the Faculty of Medicine and one of the senior researchers at Vision Lab, "lies our ability to build a stable visual map of the external world. In order to build this map our brain must work very hard, since we see for brief instants very many high resolution small images which frequently appear each time we move our eyes."

The movements by which we move our eyes are called saccades. They are very fast and occur continuously, around 3 times a second. They make the fovea (the most sensitive part of the retina) which is small, coincide with the activity of attention focussing. Our whole visual set up is built by re-elaborating and re-placing together a gigantic mosaic whose tesserae are the diverse impressions recorded by the fovea.

What emerges from this research at Vision Lab is that space and time are closely connected in the construction of the whole visual set up, for example in the construction of an image on a monitor or of this sheet of paper you are looking at right now, immersed among the many slightly out-of-focus shapes in the rest of the room.

In its continuous work of building and re-building an image, the brain anticipates new data by basing them on previous data and collocates the new details onto a precise position on its internal spatial map which in turn is based on the time taken for image acquisition and the movement of a glance from one point to another. This means that the construction of a spatial map is carried out by its being based also on the perception of time.

In Vision Lab investigations, carried out by subjecting several people to very brief visual stimuli, it was found that before or during the very fast saccadic movements, the dimensions of objects are perceived as being smaller, and the duration of events is perceived as being shorter. Furthermore, under these conditions also the perception of the number of objects changes. This, beyond suggesting that we have an (also) immediate visual perception of number, indicates that space, time and number are analysed in our brains by shared mechanisms.

The activity of "appreciating the number, the quantity of objects," affirms David Burr, Professor of Physiology Psychology at the University of Florence, senior researcher of Vision Lab and Principal Investigator of the 'S.T.A.N.I.B.' project is a sensorial fact; it has not only a cognitive but also a perceptive character."

These studies demonstrate that the construction of an external world map (a map which includes shapes, distances, colours and also numbers of objects) takes place in the cerebral cortex at a much earlier stage of analysis than was previously thought, as the Vision Lab's 'functional imaging' research has illustrated.

The fallacious certainty of referees

Another interesting field of investigation is that of the attention and certainty of choices or decisions based on our visual perception. Thanks to research at Vision Lab, we may affirm that when a referee blows his whistle with a strongly held belief that a player is off side when he actually isn't, it is not necessarily true that he was paid by someone to do it.

These experimental observations demonstrate that, in a confusion-ridden situation, the higher the number of visual stimuli, the more likely is the decision-making system of the brain to be presented with only one solution, which could be the wrong one, but which is presented in a very convincing manner.

This is probably connected to the fact that in certain situations it is necessary to make decisions quickly without spending much time on thought. However, the result of this is, as counter intuitive as it may sound, that the more confusion there is, the more trust we have in our perceptions, be they right or wrong.

The 'S.T.A.N.I.B.' Project Investigations are carried out using two methodologies. On the one hand there are the psychophysical observations: the reactions and responses of individuals in certain conditions of stimulation are studied and quantitative methods are applied, alongside physical and statistical methods, to the results of the experiments. The 'psycho' in 'psychophysical' refers in this case to the perceptive and not cognitive activity, even if, as Professor Morrone recognises, the boundaries between them are faint.

On the other hand there are the physiological investigations which utilise the sophisticated equipment of the Scientific Research Institute 'Stella Maris' in Calambrone, where one of the most powerful European pieces of equipment for functional magnetic resonance has recently been installed. From the images of the brain obtained thanks to this technology, it is possible to obtain indications on the functionalities of various areas. The images reflect blood flow variations in diverse zones of the brain and this allows us to understand which areas are activated by certain stimuli.

Work at Vision Lab is principally research at a basic level, but this has important repercussions on applied research. An example of this can be seen in the clinical field: early diagnosis of dyscalculia, the difficulty of calculation, which is more and more widespread among children; or also, in cases of surgical operations on the brain, the possibility of predicting which cerebral functions can be touched upon by operating on a determinate area; and further, the development of various rehabilitative methods thanks to indications from image and behaviour diagnosis.

On the other hand, research on perception is of extreme interest for the field of robotics. An understanding of our perception system provides us with ideas as to how to build an artificial one. In order to move in space, robots must cope with, in a certain sense, the same problems we have: they have to elaborate and render comprehensible a large quantity of perception data.

The project and Vision Lab

The 'S.T.A.N.I.B. Project' survives mainly thanks to a five year multicentric financing plan from the European Research Council. It receives about 500,000 Euros annually. This is coordinated by the Department of Psychology at the University of Florence.

Work in this laboratory follows the 'rich' tradition of neurophysiological research inaugurated at Pisa by Professor Giuseppe Moruzzi, and is followed, especially in the field of vision, by studies carried out by Lamberto Maffei, Adriana Fiorentini, Pierlorenzo Marchiafava and Luigi Cervetto.