ETken, the new single-seater of the University of Pisa is presented 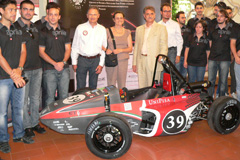 Technological research, team work and multi-disciplinary competence are the key words of the 'E-Team', the University of Pisa racing team, which for many years has taken part in the 'Formula SAE' and 'Formula Student' international competitions. There is no exception to the above work involved in the creation of the new ET4, or rather Etken, which was inaugurated at Palazzo Vitelli in the presence of the Chancellor Massimo Augello and the Vice Chancellor, Nicoletta De Francesco.

The novelty of the 2011 vehicle begins with its name, the product of a sophisticated symbolic game. ET4, in fact, should more properly be read as Etken from the capital letter 'Ken' from the Armenian alphabet which looks very similar to a 4, whose Unicode (a standard for representing characters as integers) is 1343, the year the University of Pisa was founded. Furthermore, 'Ken' is an old English term that the philosopher John Locke used to identify knowledge and from which derives the single-seater's motto: "Think beyond your ken."

Technologically speaking this new vehicle (the fourth created and built by the Pisa University team) has an Aprilia SXV engine with its chassis in steel tubes created at the 'Pieracci Meccanica' garage and super-light components designed by the students and built by 'Brusa Meccaniche' and 'INFN.' Tests were carried out thanks to vehicles being available from 'Liberty Rentals.'

The 'E-Team Project' was established in 2008. Over the course of the years, the 34 (original) members from the Faculty of Engineering were joined by students from the Faculties of Economics, Law, Letters and philosophy, Foreign languages and literatures, and Political Science, whose competences are fundamental because the team is not called only to design and build the vehicles, but also to face problems relating to research and management of economic resources, marketing, public relations and communication. 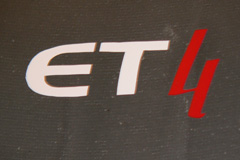 After a rather radical generational overhaul this year the team is composed of 35 students from various scientific and 'humanities' Faculties.

The debut of the single-seater on the track dates back to 2008 on the Fiorano circuit in the 'Formula SAE Italy' race. The ETI ranked first among the novices and third among the Italian teams in the endurance race. 2009 was a crucial year. With ET2ev the Pisan team took part in the 'Formula Student Germany' driving on the historical Hockenheim track, together with other 78 teams from universities all over the world. They arrived at tenth place in the 'cost report' static test . In the same year they took part in 'Formula SAE Italy' at the Varano dè Melegari racetrack, under the eyes of a technical jury, composed of engineers from the most prestigious Italian automobile firms including: Lamborghini, Ferrari, Maserati and Dallara. In the race the single-seater came in at second place in the Italian group and twelfth place out of 39 of the international teams. They arrived at ninth place in the 'design event' static test and at fifth place in the 'cost event.' 2010 was the year of ET3, created by a more numerous and heterogeneous team (a mark of the growing notoriety of the project). The team returned to competitions in Italy and Germany and projected themselves up to the top place of all the Italian teams and reached ninth place in the world championships. The 2011 program is set to have 'Formula Student Germany' in August and 'Formula SAE Italy' in September. 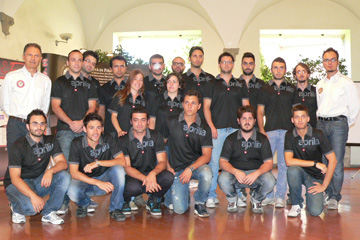 The objectives reached in these years go beyond the already excellent sporting results. The 'E-Team Project', in fact, represents a training ground where the aim is to design and create, in a short time, a technologically advanced product which is solidly verifiable on the track when competing in races. A laboratory for learning through competition, therefore, is a priceless opportunity for young students who wish to work in the most prestigious car and motorbike firms in Italy and abroad.