Secrets of pre-Columbian mummies at the Museum of Human Anatomy 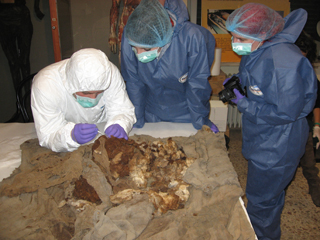 Secrets of pre-Columbian mummies preserved at the "Filippo Civinini" Museum of Human Anatomy of the University of Pisa (Department of Translational Research and New Technology in Medicine and Surgery) will soon be revealed by an international research team. Thanks to an agreement with the University of Huddersfield (UK), signed last February, pre-Columbian remains dating back 700 years, which can be traced to the Chimù and Chancay cultures, will be analysed with modern investigative techniques. Such techniques will be able to establish the cause of death and reveal details of the traditions and life-habits of these cultures.

The study will be led by Professor Stefano Vanin (together with two of his collaborators) from the University of Huddersfield. They will carry out an entomological analysis on the abovementioned remains. Vanin has, in fact, collected parasites and other insects which colonised the bodies before and after death which will be analysed and classified. In this way, it will be possible to offer information on the social characteristics and health of these particular groups of Peruvian people who lived long ago. Some results have already been noted. "Our initial observations allowed us to identify a flea and some lice," announces Professor Gianfranco Natale, Professor of Human Anatomy at Pisa University and director of the museum. "Thanks to this study we will be able to establish if the bacillus of the plague was present in the American continent also during the pre-Columbian epoch." 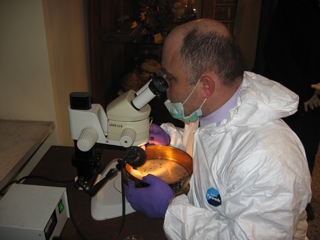 There are three pre-Columbian mummies at the Museum of Human Anatomy. One is a child and the other two are male adults. They arrived in Pisa during the second half of the eighteen hundreds. They were carried inside characteristic 'fardos', cloth wrappings of varying layers into which bodies (in the fetal position) were laid. These corpses were bundled up in layers of cloth which contained objects of daily life such as shoes, metal objects and also food fragments.

The story of their arrival in Pisa is fascinating. The mummies and the strongboxes containing artefacts for funereal rites (which today are preserved at the museum) are part of the remains collected in South America by Carlo Regnoli (1838-1873), a Pisan medical doctor and Professor of Ophthalmology. He distinguished himself in a number of ways. As a medical doctor he took part in the Third Italian War of Independence by curing wounded soldiers. Being fond of archeology, he carried out research both in Egypt and in South America. In 1869 he went on an important expedition in Peru from where he brought back pre-Columbian vases, botanical remains, mummy exemplars and artefacts for funereal rites, which he later donated to the Museum of Human Anatomy.

The museum, established by Filippo Civinini during the 1830's, hosts around 3,400 exhibits subdivided into medical collections to which the pre-Columbian and Egyptian archeological collections have been added. As well as the mummies, the most interesting pre-Columbian remains preserved in Pisa are the 121 vases belonging to the pre-Inca culture, a basket, votive objects and an 'antara', a terracotta musical instrument. Further pre-Columbian items are preserved in thirty-six elegant glass ampoules containing fragments of vases, shells and, above all, plant remains. 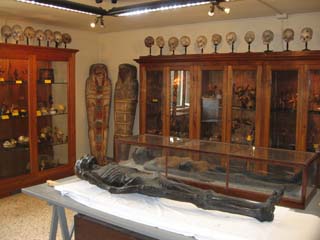 Other remains are preserved in five wooden strongboxes. These include skulls, artefacts for funereal rites (utensils, bowls, cloth, plant remains) as well as various 'fardos' which will assuredly be of great interest to medical and scientific research.

Even more striking is an impressive collection of heads from a family whose members were decapitated. Some scalps have also been preserved.

Inside one of the many pre-Columbian skulls a small page was found which made reference to a 'Botica y Drogueria del Ynca by Abbondio Roncoroni, Cordoba'. This brief text recounts the dramatic story of a person to whom the skull belonged. "This skull belongs to Cacicco Canepan who died in the "Paso de los Poleos" zone, Rio 4th, Province of Cordoba in the Argentinian Republic. The 9th Cavalry Regiment killed him. It was commanded by Commander Don Isidro Sora in the month of March of the year 1869. He belongs to the tribe of Rauqueles Indians." Probably Regnoli bought this skull at an archeological market in Cordoba.