The Leonardian sea monster is a fossil whale

Painter, sculptor, draftsman, architect, anatomist, engineer and philosopher: in other words, a universal genius. It is in these terms that, after the 500th anniversary of his death (1519), Leonardo da Vinci is universally known. Leonardo is also widely regarded as one of the precursors of modern geology. He correctly described and interpreted the layered sedimentary rocks and he even came to understand the true nature of fossils, rejecting the role of the Universal Deluge as an explanation for the discovery of shells in the rocks outcropping in mountain areas and a great distance from the coast. 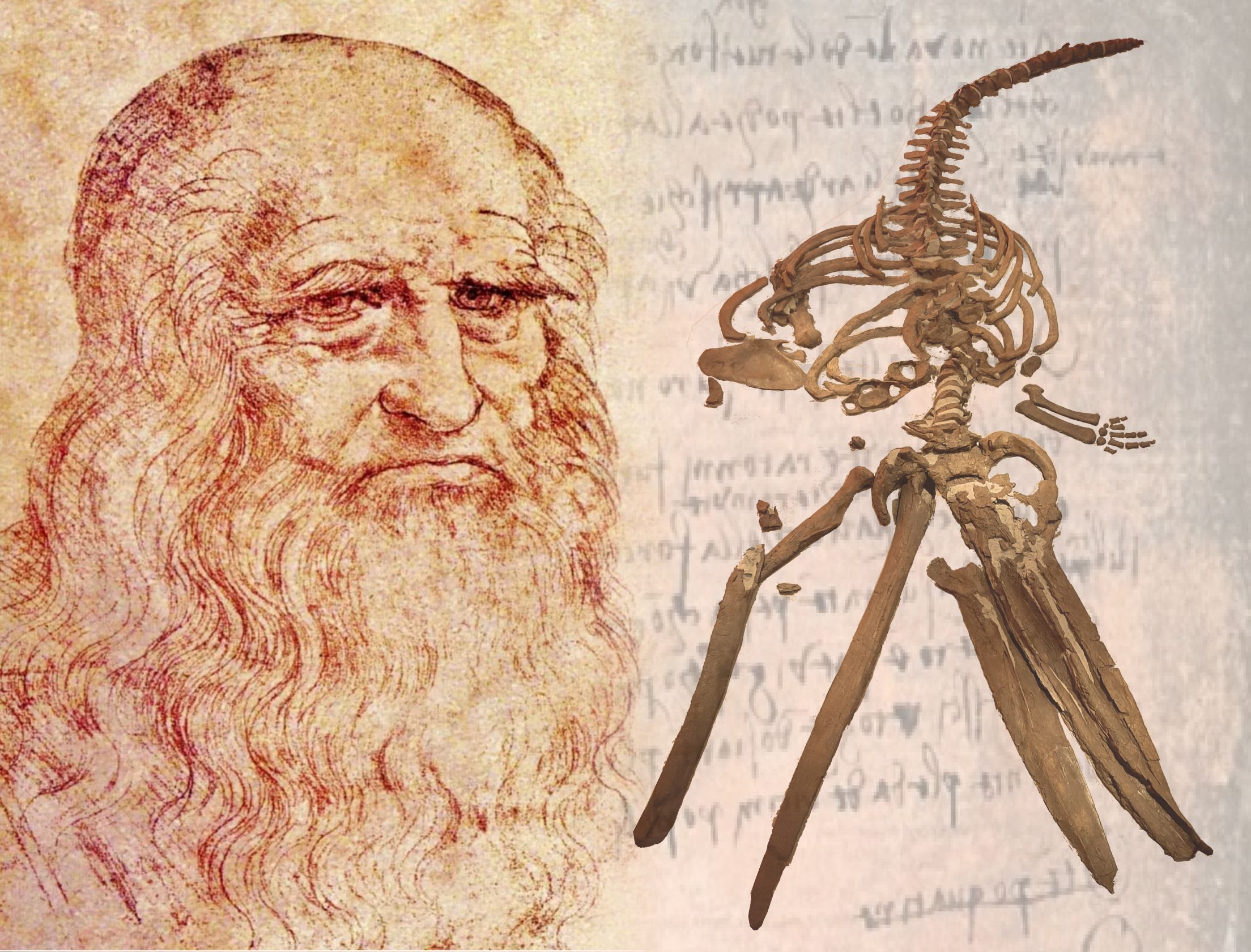 Leonardo and the fossil whale of Castelfiorentino (FI) exhibited at the GAMPS Geo-paleontological Museum, Badia a Settimo (FI).

The recent analysis of a passage contained in the famous Codex Arundel - an impressive collection of autographed Leonardian manuscripts preserved in the British Library (London) - suggests that Leonardo's reflections on geology, and in particular on fossils, might have been even broader, including the marine vertebrate fossils: this Leonardo also proves to be a precursor of Vertebrate Paleontology, more than 300 years before George Cuvier, the great French naturalist that is globally recognized as the founding father of this discipline.

A study that details Leonardo's early experience with fossil vertebrates has just been published in the international journal Historical Biology, being authored by Alberto Collareta, Marco Collareta and Giovanni Bianucci of the University of Pisa and by Annalisa Berta of the University of San Diego (California, USA).

“One of the sheets that comprise the Codex Arundel - says Alberto Collareta, paleontologist at the Department of Earth Sciences - contains the description of the remains of a mighty sea monster that has long been interpreted as a fantastic or metaphorical digression of the young Leonardo, if not as a poetic reworking of alleged classical readings of the Tuscan genius. Described as a "mighty and once living instrument of formative nature", in the past it managed to terrify with iis fury the "shoals of dolphins and big tuna fish". The marine monster, having been separated from an unfathomable amount of time by the marine environment, is now reduced to few "defleshed, stripped and bare bones " lying on the mainland, acting as "an armature and a support" to the surrounding reliefs”.

The Leonardian text, rich of incomplete sentences and wandering corrections, is however explicit enough to have suggested to the US biologist Kay Etheridge to identify the sea monster with a fossil whale, a hypothesis that was published by the same researcher in 2014. Etheridge's reconstruction, however, displays a significant weak point, as it seems to imply that, according to the Leonardian text, Leonardo's encounter with a fossil whale should have taken place in a somewhat unusual environment, that is, a cave. The caves of Tuscany are known to be sometimes home to the fossils of terrestrial vertebrates, but certainly not of cetaceans! The hypothesis of Leonardo as a precursor of vertebrate paleontology seemed therefore to have reached a dead end. 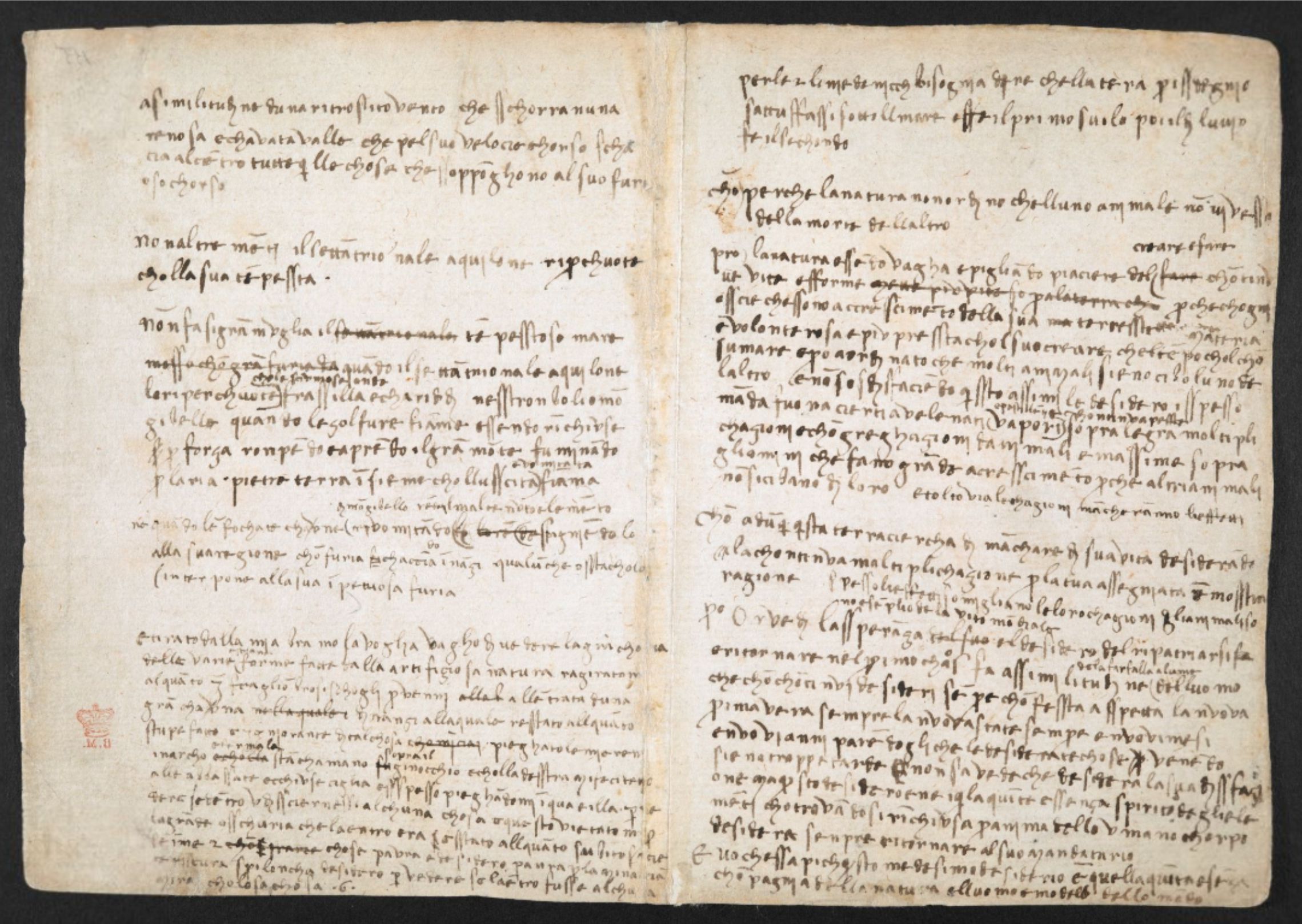 Reproduction of folios 154v (left corner) and 155r (right corner) of the Codex Arundel. In folio 155r, Leonardo reports on visiting a cave. Scanned version of the original folio (after the British Library website).

“Nonetheless – Alberto Collareta continues – Leonardo's Tuscany is a real "land of whales" – fossil whales, of course - which has ancient origins. If, walking through the Tuscan hills that extend from the Apennines to the coastal plains, we could travel back in time to the interval that geologists call Pliocene (from about 5.3 to about 2.6 million years ago), we would observe a landscape that greatly differ from today's one, being clearly dominated by the most abundant compound on the surface of our planet: water. In fact, during the Pliocene, a large part of the Tuscan territory was submerged by sea, the latter being populated by a large variety of organisms. The deep geological and climatic changes that have occurred since then have reshaped the territory, making it an "open-cast mine" full of clues that, if duly interpreted, can reveal the ancient origins of the present-day environment. Most of the Tuscan hills, including the reliefs on which Vinci (Leonardo's birthplace, where he lived until his youth) stands, consist mainly of sands and clays that deposited on ancient seabeds and still host the remains of the Pliocene marine faunas. Fossil finds of whales, dolphins, dugongs and sharks - besides remains of molluscs, crustaceans and other invertebrates - are often found in sunflower fields, in vineyards, at the foot of the badlands and along the flanks of the hills that develop upon the Tuscan Pliocene soils. Evidence of this is provided by the recent discovery of the extinct dolphin Casatia thermophila, am archaic relative of the modern narwhal and beluga whales (Arctic cetaceans par excellence!) which, 5 million years ago, inhabited the (tropical) sea  of southern Tuscany, and well as by the rich collection of Tuscan fossil cetaceans (including some 19th-century finds) on display at the Natural History Museum of the University of Pisa”.

“It is starting from this rich paleontological scenario - says Giovanni Bianucci, paleontologist at the Department of Earth Sciences - that we decided to reconsider the question of the Leonardian sea monster. In our opinion, Leonardo's description is too much reminiscent of the appearance of fossil whales which, since the 18th century, have been known through the discovery of fossils that, on the whole, allowed to write an important chapter in the evolutionary history of cetaceans”.

“Our attention - explains Marco Collareta, art historian at the Department of Civilization and Forms of Knowledge - first focused on a careful analysis of Leonardo's text and on the alleged references to the cave. Although Leonardo mentions the term 'cavernous' in an incomplete sentence (“by the cavernous and twisted entrail”), this term has a predominantly textural meaning in Leonardian writings - that is, it represents an indication of porosity and permeability to fluids, and it was used by Leonardo in reference to the ability of rocks (and, more generally, of the Earth) to allow the percolation of rainwater. The whole expression “by the cavernous and twisted entrail”, in Leonardo's language, does not fit the description of an underground cave but rather the appearance of the fossil skeleton or the entombing sediments. Furthermore, the fact that the sheet containing the description of the sea monster is placed, in the current arrangement of the Codex Arundel, after a sheet whose text deals with Leonardo's visit to a cave, should not be taken as an indication of any logical or chronological bond between the two commentaries “.

Codex Arundel was in fact assembled after Leonardo's death and the sheets that compose it, including pages from notebooks or other gatherings, have subsequently been rebound in ‘miscellaneous’ collections. Therefore, Leonardo clearly writes that he visited a cave in his youth, in search of wonders enclosed by the Earth's underground, but he certainly did not find the remains of the 'sea monster' therein.

“However, there are many indications - continues Alberto Collareta - which suggest that the young Leonardo really observed a fossil whale, as suggested by Etheridge, and that this event significantly oriented his paleontological and geoscientific reflection in an extraordinarily modern sense. In fact, Leonardo seemingly made true taphonomic considerations (i.e., relating to the preservation state of the fossil he described: take present the aforementioned expression “by the cavernous and twisted entrail”) about the remains of the sea monster. In addition, the back of the sheet on which this description is reported begins with a short sentence reporting on the observation of two layers of fossil shells, and the impossibility of rationally explain both of them solely by the Universal Flood. Clear reworkings of the text on the sea monster also appear in another Leonardian manuscript in which the Earth's surface is described as in continuous transformation and even capable of 'engulfing' the vestiges of ancient civilizations. Here the sea monster is even repeatedly described as provided with “bristles”, a term that recalls the presence of baleen, i.e., filamentous horny structures that characterize the present-day baleen whales. Leonardo's passage on the sea monster also contains explicit references to the incommensurate depth of geological time (“how many kings, how many peoples have you undone [...] since the wondrous form of this fish died here?”) which led the environment around the remains of the sea monster to radically change, from the sea finally becoming mainland through “new and various habitations”. The location of the sea monster, which Leonardo describes as acting as "an armature and a support" to the surrounding reliefs, also suggests a location along the side of a hill - a setting that is perfectly consistent with the most typical scenarios of the finds of Tuscan fossil whales. Last but not least, a review of the Tuscan fossil cetaceans shows that, over the past two centuries, at least eight Tuscan localities in the vicinities of Vinci have provided significant fossil remains of large whales”. 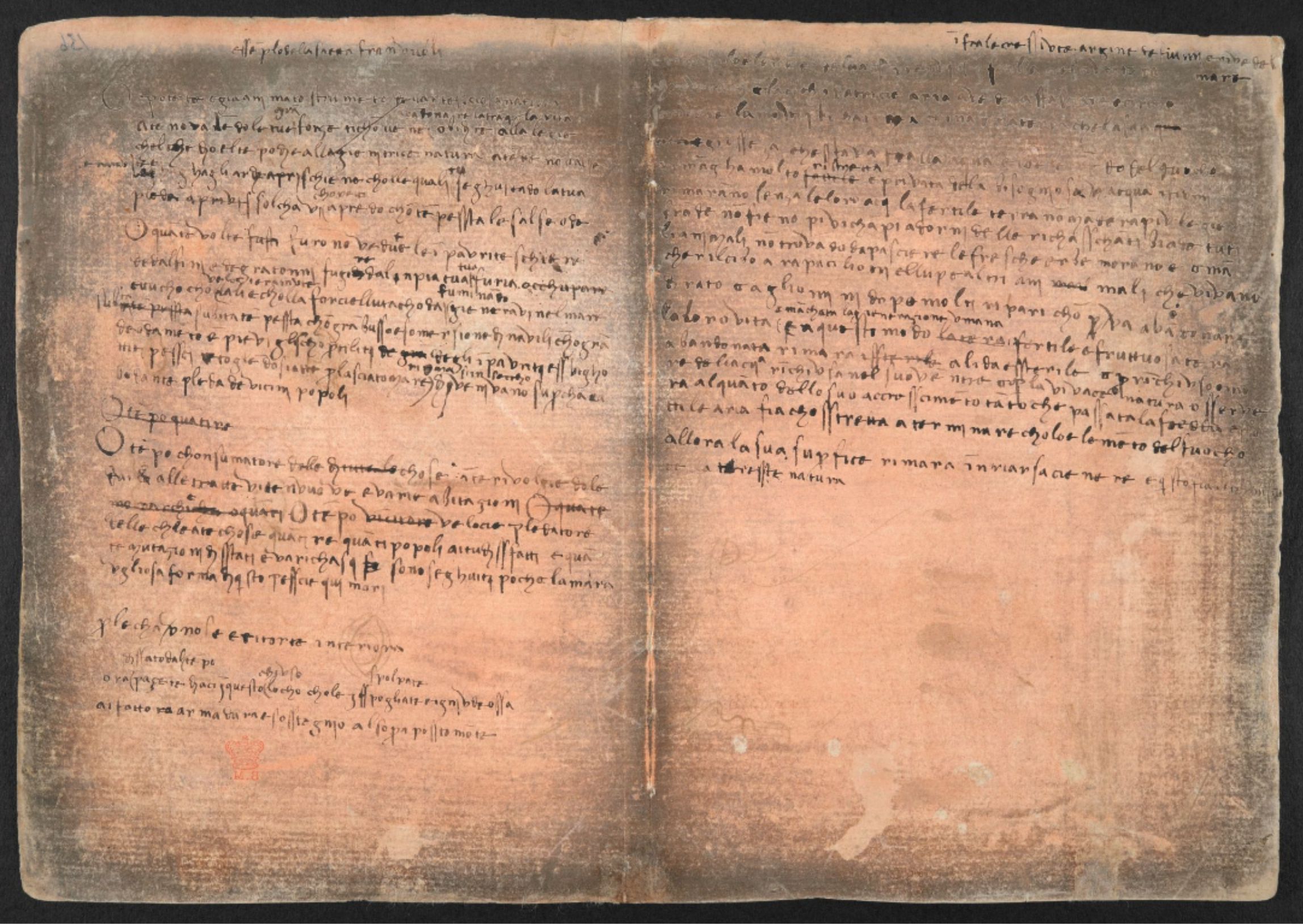 Reproduction of folios 155v (left corner) and 156r (right corner) of the Codex Arundel. In folio 156r, Leonardo depicts a once-mighty ʽmarine monster’. The image has been reversed in order to account for Leonardo’s mirror writing. Scanned version of the original folio (after the British Library website).

“Rather than a fantastic digression on the themes of ancient literature, Leonardo's text on the sea monster is therefore more likely to represent the oldest description of a fossil cetacean known so far - concludes Giovanni Bianucci. It seems to have had a significant impact on the subsequent development of Leonardo's thought in the fields of geology and paleontology, which on the whole shows characters of astonishing modernity. However, it would be anachronistic to describe Leonardo as the father of modern geology and paleontology, since his reflections remained largely in the form of private notes which, had no resonance among the coeval 'philosophers of nature'. Two centuries later, it was the time of of another great genius, the Danish Niels Stensen (who is rightly celebrated as Fundator Geologiae), who replicated the main geological observations made by Leonardo (once again, among the Pliocene hills of Tuscany!), summarized them in a few principles having a universal value, and published them in a famous essay that saw the light in 1669. The following year, in a booklet that is significantly titled "The vain speculation deceived by meaning", the Sicilian painter Agostino Scilla described, illustrated and correctly interpreted some fossil remains of marine vertebrates, including a cetacean belonging to the extinct family Squalodontidae. A couple of centuries later, illustrious naturalists (both academics and 'amateurs' of the highest level) from the 19th century Italy, among whom the names of Giovanni Capellini and Roberto Lawley stand out, produced the first studies on the marine vertebrates of the Tuscan Pliocene, thus disseminating the knowledge of the extraordinary paleontological heritage of Tuscany to the international scientific community”.

Nobody knows whether or not Stenone, Scilla, Capellini and Lawley were ever aware of retracing the steps of Leonardo da Vinci. If this had not been the case, we certainly cannot blame them: everything suggests that the merits and intuitions of the great Tuscan genius in the geological and paleontological field still have to be fully recognized.