The oldest cetaceans retained a sense of smell

It may sound strange but it may happen that the patient entering the hospital for a CT scan is not a human but an animal lived more than 40 million years ago. In this case the "patient" is the fossil skull of an archaeocete kept at the Natural History Museum of the University of Pisa and the CT scan provided a three-dimensional image of its delicate internal structures. Very important was the observation of the thin bony sheets linked to the sense of smell; their presence and dimension testify that the smell of these ancient cetaceans was intermediate in between the well-developed ability to sniff of terrestrial mammals and the one totally absent in dolphins or extremely reduced in baleen whales. This is an important new paleontological evidence confirming that cetaceans derive from terrestrial animals and in particular from the artiodactyls, a group of mammals today represented by camels, deers, pigs and hippopotamuses. 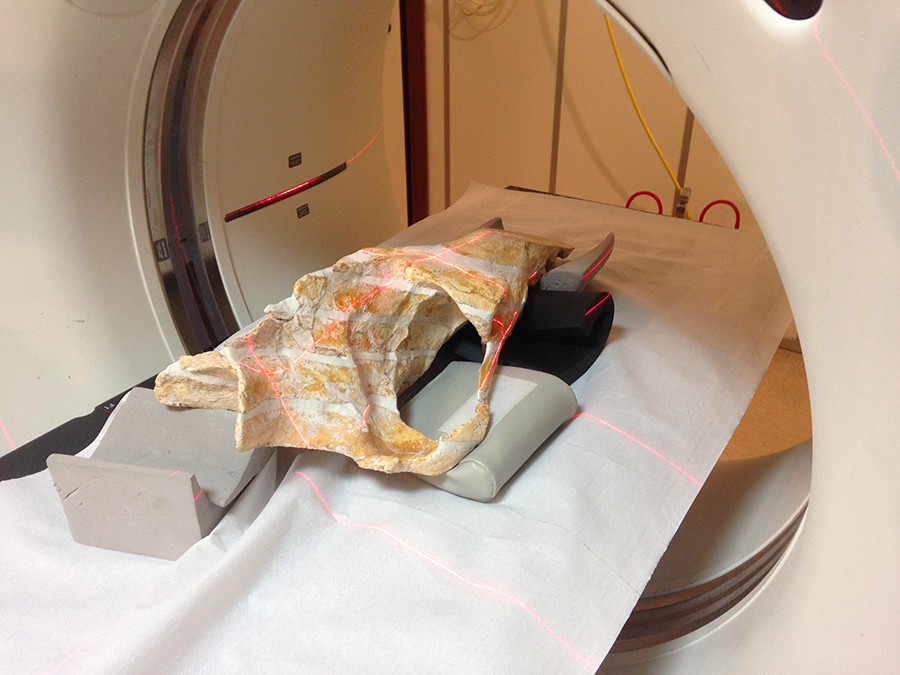 CT scan of the skull of Aegyptocetus tarfa in the Department of Translational research and new technologies in medicine and surgery at the University of Pisa (photo E. Peri).

The study, recently published in the Journal of Anatomy, involved Prof. Giovanni Bianucci and his PhD student Emanuele Peri, paleontologists at the Department of Earth Sciences of the University of Pisa, Dr. Giacomo Aringhieri, researcher at the Department of Translational research and new technologies in medicine and surgery at the University of Pisa and Prof. Philip Gingerich, paleontologist at the Museum of Paleontology, University of Michigan. The specimen studied is part of a skeleton described in 2012 by Giovanni Bianucci and Philip Gingerich with the name of Aegyptocetus tarfa. This extraordinary fossil was casually discovered in 2002 by a marble worker of Pietrasanta, in the province of Lucca, Tuscany, when cutting a block of limestone from Egypt.

"In recent years - explains Giovanni Bianucci - many exceptionally well-preserved fossils of archaeocetes have been discovered and they have allowed us to reconstruct in detail the progressive transformation of these mammals to adapt to aquatic life: the forelimbs have turned into pectoral fins and posterior limbs have disappeared, replaced by the caudal fin. Thanks to these discoveries, today archaeocetes represent one of the strongest evidence supporting evolution.

Most of these discoveries had already been made when we began to study the skeleton of Aegyptocetus tarfa: it seemed that there was nothing new to say about it, especially because its limbs had not preserved. However, impressed by the exceptional mineralization and perfect conservation of its bones, we tried to reconstruct the internal anatomy of the skull and in particular the turbinates (those delicate bony plates found in the nasal cavities of mammals), through computerized axial tomography (CT scan). Therefore in 2015 I proposed to Emanuele, a student of Geological Sciences and Technologies, to develop this topic as research for his degree thesis". 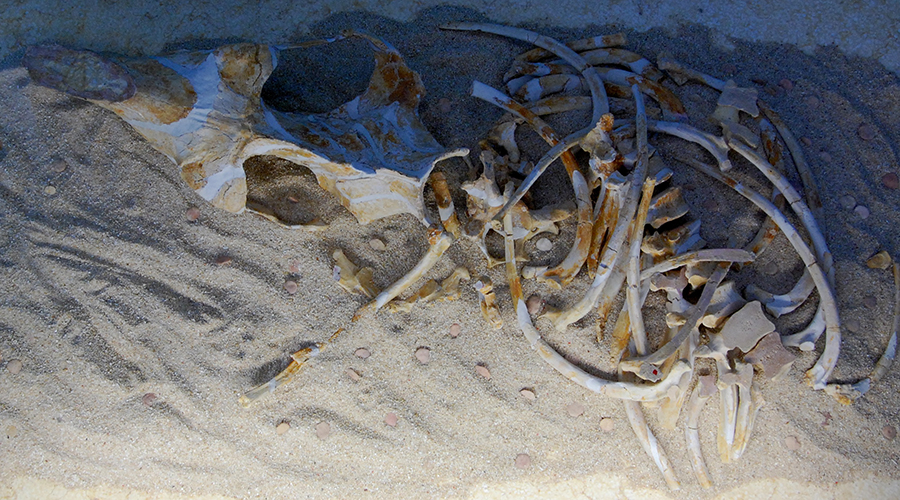 The skeleton of Aegyptocetus tarfa in the Archaeocete exhibition hall of the Natural History Museum of the University of Pisa (photo G. Bianucci).

"We have been lucky - says Emanuele Peri - because thanks to the perfect preservation of the bony plates and the high contrast of density between the bone and the surrounding rock, it has been possible to obtain thousands of sections of the skull then assembled together by a software that allowed us to reconstruct the shape of the turbinates in three dimensions. But the biggest surprise was when we realized that Aegyptocetus tarfa presented a big difference in the development of the turbinates having an olfactory function (ectoturbinates) and those having respiratory function (maxilloturbinates). The ectoturbinates were about a quarter of those of present terrestrial mammals, suggesting that this archaeocete still had a rather developed sense of smell, whereas the maxilloturbinates were extremely reduced to indicate that the loss of their function as already occurred".

"This discovery is very important - continues Bianucci - both because it is the first time that the turbinates of an archaeocete are reconstructed in such a good detail but, above all, for the precious information on the evolution of these marine mammals we obtained through the non invasive examination of extremely delicate structures generally not preserved in fossils. Moreover, the comparison between the turbinates of Aegyptocetus tarfa and those of various artiodactyls gave us a further confirmation that the cetaceans derive from this large group of mammals". 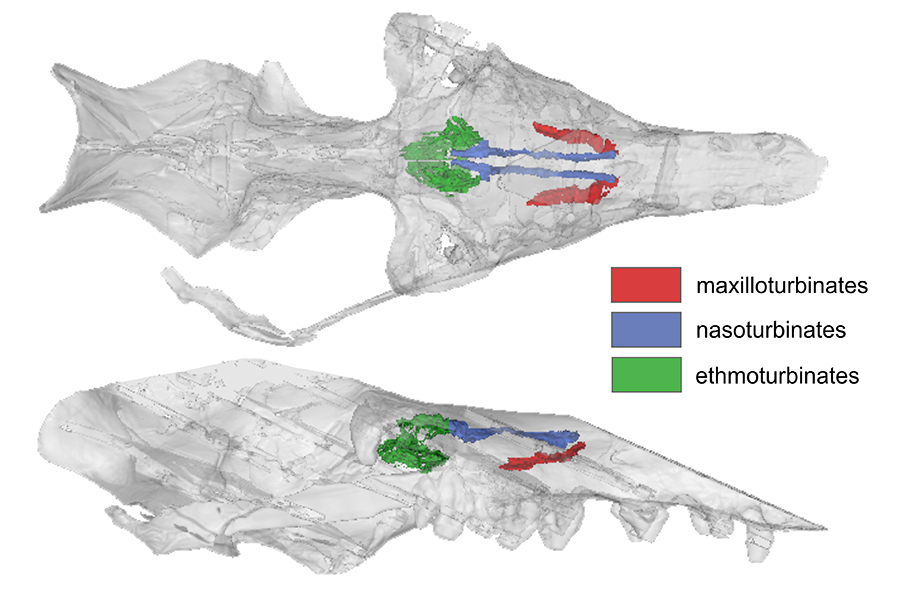 "I particularly wish to underline - concludes Prof. Davide Caramella, director of the School of Specialization in Radiology at the University of Pisa - that this interdisciplinary collaboration is of great value especially for our young Researchers. In fact, testing innovative applications in a context that is "atypical" for us, such as the paleontological one, can lead not only to important scientific discoveries, such as the one just published, but also represents an opportunity to look beyond the classical boundaries of our discipline and expand the research perspectives of 3D imaging".