Plants are often defined as the green lungs of our planet and yet in order to produce new leaves and flowers they need only a little oxygen.  This discovery comes from an international study recently published in “Nature” and carried out by researchers from the University of Pisa, Aachen, Copenhagen, Heidelberg and the Sant’Anna School of Advanced Studies.

“The identification of this capacity in plants,” explains Francesco Licausi, an associate professor of plant physiology at the University of Pisa and coordinator of the research, ”may have multiple applications, among which, for example, is the selection of species capable of resisting  against environmental stress that reduces oxygen, such as high temperatures or floods, but also for more futuristic scenarios such as space farming, where the conditions of microgravity, in fact, reduce the transport of oxygen.” 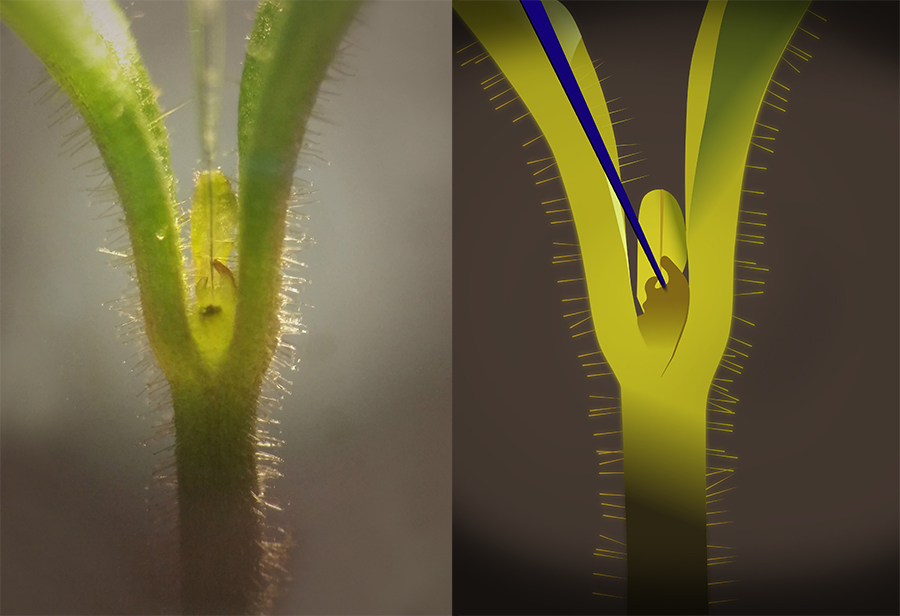 The researchers were able to identify this mechanism in plants by measuring the levels of oxygen in an area of around a few hundred cells, called ‘plant shoot meristems‘ using a combination of microscopic electronic and biotechnological sensors. In this way, they were able to see that the levels of oxygen drop drastically precisely in those tissues responsible for the production of new leaves and flowers where a protein which is sensitive to oxygen, called ZPR2, acts.

Confocal micography of the Arabidopsis inflorescence meristem, the plant used as the model of study. The cellular walls are coloured blue, the young floral buds are marked with a green fluorescent protein while the production centre of the stem cells is distinguished by fluorescent red. (Author Daan Welts)

This discovery follows those made in past years by the same team of researchers and represents a big step forward in understanding how the production of new organs is linked to environmental parameters, therefore influencing growth and productivity.

“Preserving hypoxic conditions in order to maintain pluripotency is not specific to plants: numerous types of stem cells, including human stem cells, share this prerequisite,” concludes Daan A. Weits, a Dutch researcher at PlantLab in the Sant’Anna School of Advanced Studies, and the principal investigator of the research project. “This similarity is astonishing, considering how far apart plants and animals are from the point of view of evolution, even though they both represent the apex of the evolution of multicellular life on our planet.”