Innovation in the higher education system in Central Asia

The University of Pisa coordinator of «TuCAHEA», a project that involves the five ex-Soviet republics

It is named «TuCAHEA» and it is a project financed by the European Commission in the framework of the TEMPUS programme. It involves Kazakhstan, Kyrgyzstan, Tajikistan, Turkmenistan and Uzbekistan, the five republics of the ex-Soviet area, each with its own cultures, its history and its languages. Coordinated by the University of Pisa, in conjuction with the University of Groningen, the project aims at finding ways to reform the organizational and normative models of the university systems of Central Asia, in order to make them compatible among themselves and aligned with the European systems.

During the month of February and the first week of March, the project will be launched in all the partner countries. "The objective of «TuCAHEA» is to create a higher education area (CAHEA, Central Asian Higher Education Area) which is compatible with the European area (EHEA, European Higher Education Area),by using the "Tuning" methodologu – explains Professor Ann Katherine Isaacs, who coordinates the project, assisted by Dr. Viktoriya Kolp Panchenko. The grantholder, responsible for the administrative and financial side of the proect, is the University of Groningen, whereas our University is responsible for the scientific and academic coordination.

The consortium includes 47 partners, conisting of the five Ministries of Education of the five partner countries, 8 European partners and 34 Central Asian universities. The project, that has been awarded a grant of 1.3 million euros, began inOctober 2012 and will continue until October 2015. Between the second week of February and the beginning of March five meetings will be held, one in each of the five countries, in Almaty (KZ), Bishkek (KG), Dushanbe (TJ), Ashgabat (TM) and Tashkent (UZ). Each meeting will have a public part and a part dedicated to the partners' working sessions: the partners will develop new shared criteria, based on the competences that the students will have to develop during their studies.

"Tuning", thanks to numerous projects in which the University of Pisa has collaborated, has become a process in which universities are participating in nearly all the world, from Europe, Latin America, to the Russian Federation, to the USA and. most recently, to China. 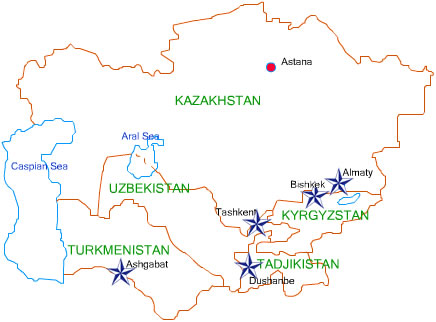