The largest fossil whale ever found

A new study just published in the international journal Biology Letters, published by the prestigious Royal Society of London, describes the enormous skeleton of a fossil blue whale, discovered in 2006 on the edge of Lake San Giuliano near Matera (southern Italy). This research involved the palaeontologists Giovanni Bianucci, Alberto Collareta, Walter Landini, Caterina Morigi and Angelo Varolaof the Department of Earth Sciences of the University of Pisa, Agata Di Stefano of the Department of Biological Geological and Environmental Sciences of the University of Catania, and Felix Marxof the Directorate Earth and History of Life of the Royal Belgian Institute of Natural Sciences in Brussels. 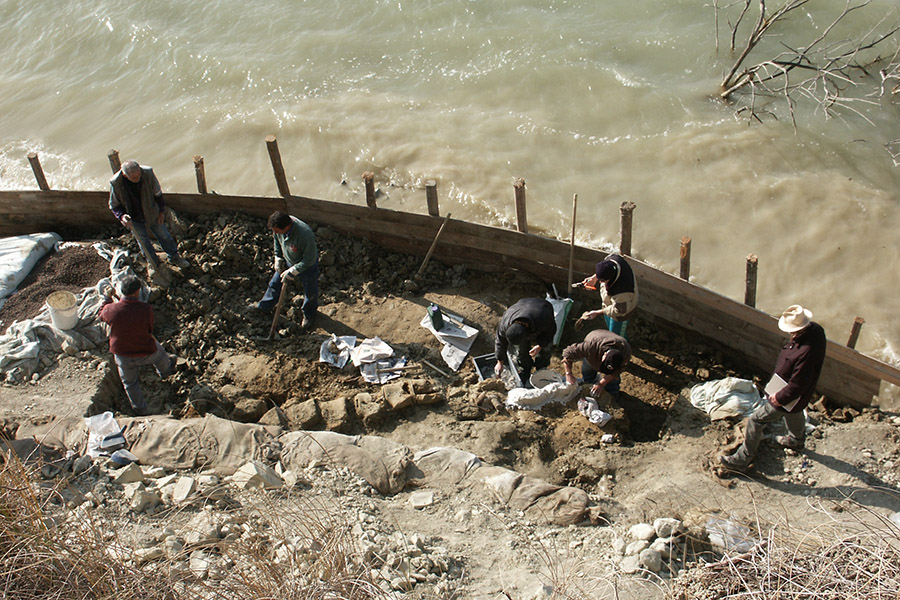 Giovanni Bianucci, who took part in the excavation and coordinated the study of the fossil, explains: "The shape of its bones clearly identifies the Matera fossil as a close relative of the living blue whale (Balaenoptera musculus), the largest animal that ever lived. This idea also fits with the estimated length of the new specimen, which at 26 meters is the largest whale fossil ever described, and perhaps the largest whale that ever swam in the Mediterranean Sea. This finding is important not just because it is a world record, but above all because of its implications for the evolution of extreme size". 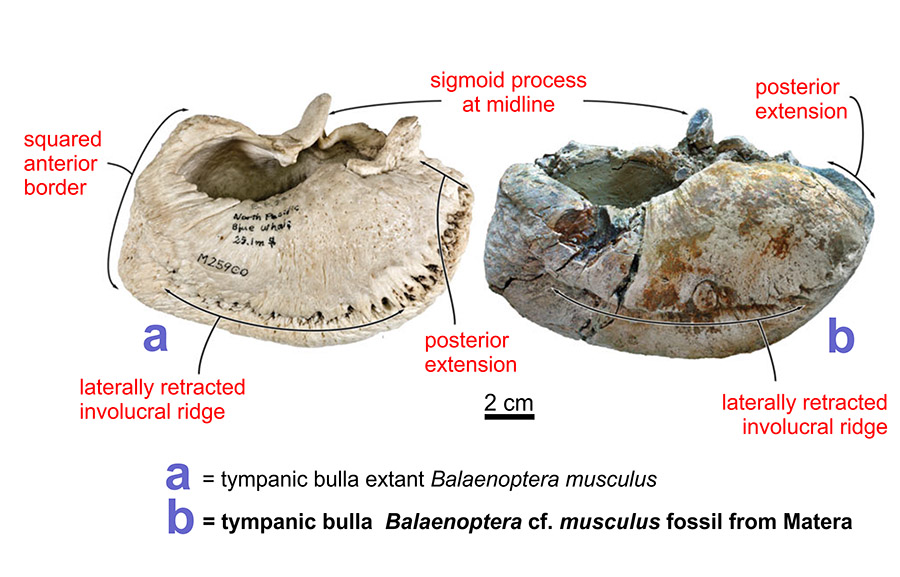 Comparison between the ear bones of the extant blue whale and the fossil from Matera, highlighting similar features (photo and composition by F. Marx and G. Bianucci).

Gigantism is a phenomenon that has emerged, independently and at different times, in many vertebrate lineages. Large body size is thought to confer some form of competitive advantage, but exactly how and why it evolved remains a matter of debate. In recent years, research into vertebrate gigantism has focused especially on baleen whales (Mysticeti), which include the largest animals on Earth. By far the biggest is the blue whale, which can exceed 30 meters in length and reach up to 180 tonnes in weight. 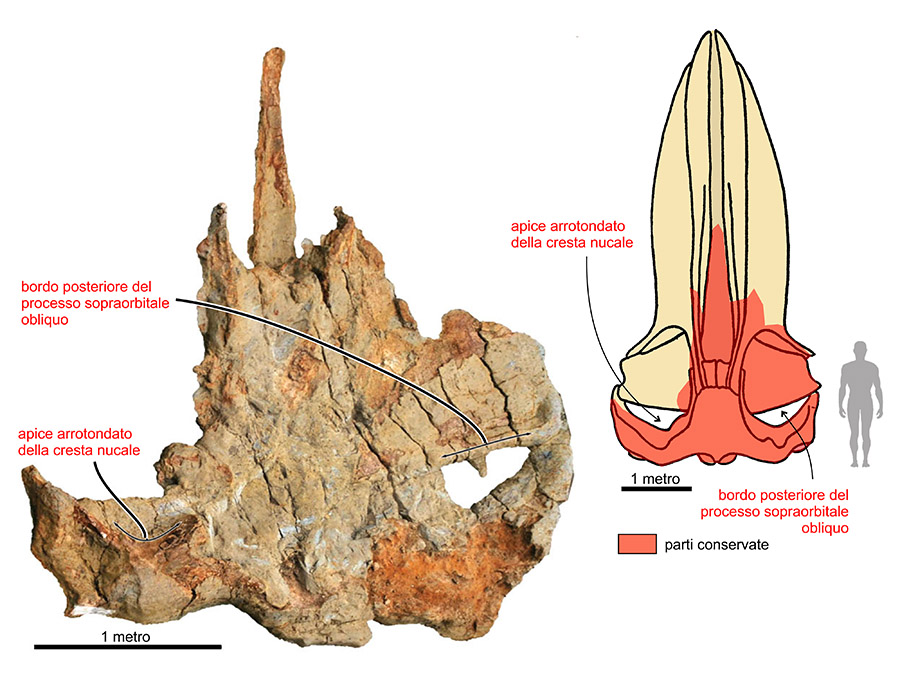 Skull of Balaenoptera cf. musculus from Matera (left), next to an explanatory drawing showing the position of the preserved bones in the complete skull (photo of the skull by Akhet s.r.l.; drawing and composition by G. Bianucci and F. Marx).

Unlike most other mammals, mysticetes lack teeth, and instead use comb-like keratinous plates hanging from their upper jaw to trap tiny prey like krill. Their extremely large size has been interpreted as a way to avoid predation, e.g. by the - now extinct - gigantic sperm whale Livyatan melvillei, or the equally impressive megatooth shark Carcharocles megalodon; or as the result of a recent change in the availability and distribution of prey, which would have forced whales to move between distant feeding and/or breeding grounds.

Artistic reconstruction of the Matera whale (drawing by Alberto Gennari).

"Most fossil whales are much smaller than their living relatives" explains Alberto Collareta, "which has led to the idea that baleen whale gigantism is a relatively recent phenomenon. For example, one recent study modelled the evolution of mysticete body size over time, and found that extremely large whales only arose during the past 2-3 million years. Unfortunately, the mysticete fossil record of this period is rather poor, which means that scientists so far had to rely mainly on data from the living species".

Fossils from the past 2-3 million years are rare, because sea levels during this period were often lower than today. Most of the fossils that formed were drowned when the water rose again, and now lie inaccessible beneath the ocean floor. There are, however, some exceptions, such as the new blue whale from Matera. Agata di Stefano and Caterina Morigi analysed microfossils found with the specimen, which showed that the animal lived sometime between 1.49 and 1.25 million years ago. Its size demonstrates that extremely large whales already existed back then, and likely arose earlier than previously thought.

"Together, the Matera whale and some other, even older finds from Peru show that large whales evolved earlier, and probably more gradually, than previously thought. These ocean giants play a crucial role as ecosystem engineers, and probably have done so for quite some time." says Felix Marx.

Giovanni Bianucci concludes: "The profound impact of baleen whales on the modern ocean highlights the need to understand their deep-time ecology. Doing so will help us gain a better understanding of the evolutionary dynamics of the marine environment, and the delicate balance of the biological communities within it". 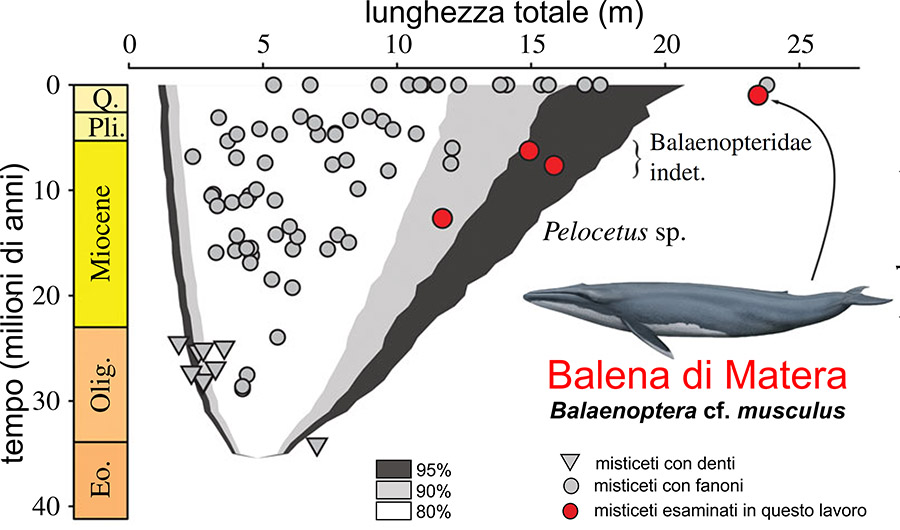