The digital revolution has turned 50: in 1969 the University of Pisa established the first degree course in Computer Science in Italy

A series of events named “Informatica50” to celebrate the anniversary has been presented: it begins on 25th March with "The Reversed Game" and Alessandro Baricco who will be interviewing students and teaching staff of the university

The first graduates in Computer Science in Italy were taught in Pisa: fifty years ago, in 1969, the University of Pisa established the first degree course in Computer Science in Italy, placing the university at the forefront of the digital revolution which has transformed our daily lives. In order to commemorate and celebrate this historic anniversary, the University of Pisa has organized “Informatica50”, which throughout 2019 will include meetings and events, an exhibition, an art competition and many other initiatives. Informatica50 was presented in the university administrative building on Tuesday 19th March by the rector Paolo Mancarella, the deputy rector, Nicoletta De Francesco, and the director of the Department of Computer Science, Gian-Luigi Ferrari. 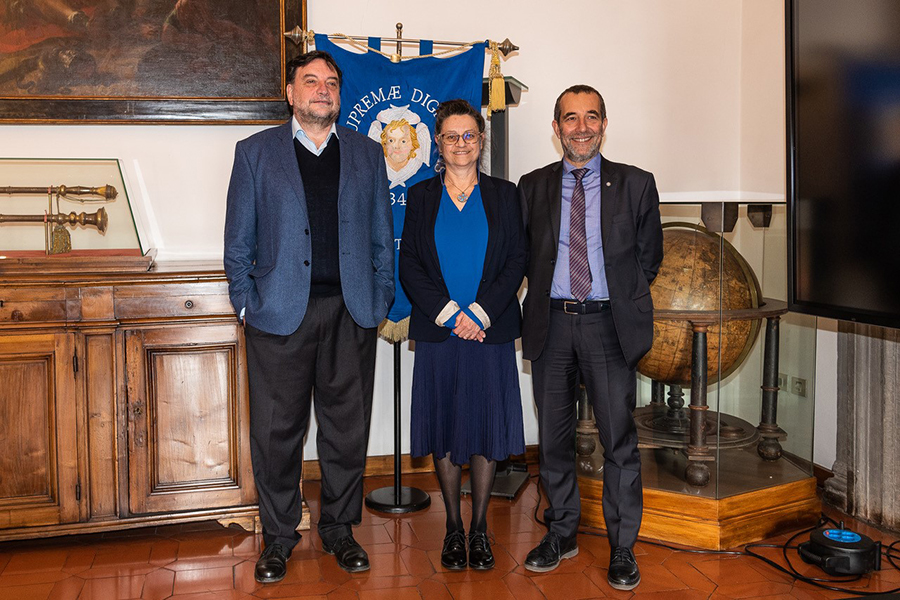 The events begin on Monday 25th March with “The Reversed Game”, which is open to the public and in which Alessandro Baricco will be interviewing teaching staff and students from the university, as well as Enrico Dameri, a graduate from the University of Pisa and today Chief Executive Officer at LIST, to talk about the rise of the digital era and the challenges facing computer science of the future.

The event will be chaired by Claudio Giua, and will see professors Antonio Bicchi, Nicoletta De Francesco, Paolo Ferragina, Gianluigi Ferrari, Emanuela Navarretta and Enrica Salvatori on stage alongside students Fulvio Denza and Ismail El Gharras. The meeting will take place in the Aula Magna of Polo Fibonacci, from 5.30 pm.

Informatica50 events will follow three strands which recall the classical structure of computers: memory, processing and communication. The memory element will be dedicated to events piecing together stories and memories of the first graduates, in a dialogue with present-day students and the public. In this regard, an exhibition will be mounted to promote the collection housed in the Museum of Computing Machinery and a web doc will be created including the main characters and the evolution of the history of computer science in Pisa. For the processing element, the challenge will be to outline future scenarios of computer science research. The communication theme will start from everything which has to do with the so-called digital society to finally shedding light on connections between computer science and aspects of everyday life, from art to music and the cinema, from video art to comic strips and videogames. Academics from various fields will discuss the evolution of Artificial Intelligence, illustrating the areas of freedom in social networks and Big Data, and will talk about forms of entertainment on the web. A project for the creation of a permanent work of art to commemorate Pisa’s leading role in the institution and growth of computer science in Italy will be chosen through a public competition.

“The degree course in Computer Science is the reason I moved to Pisa in 1977: being able to celebrate the 50th anniversary of its foundation as rector of the university is a very thrilling and moving experience for me,” said Professor Paolo Mancarella. “The journey which was undertaken at that time has led our university to levels of excellence which have been confirmed yet again this year by the excellent placings our subjects have received in international rankings. It is up to us to continue along this path and aim ever higher, with the same enthusiasm as back then which we hope to pass on to our young researchers of today.”

“The computer science adventure of Pisa, which had already begun in the 1950s with the creation of the first Italian computer, the CEP, must become part of our collective memory and add one more jewel to the rich history of the city,” stressed Professor Nicoletta De Francesco. “These celebrations do not only include the university but the whole city, and for this reason we will be collaborating closely with Pisa City Council during the various initiatives.”

”Just as it was 50 years ago,” said Gian-Luigi Ferrari, director of the Department of Computer Science, “computer science is still today a young scientific subject capable of developing innovation and answering the needs of today’s society. It was founded by people with a strategic vision - that of introducing an innovative degree with a strong scientific base and close interdisciplinary collaboration. The value and merit of the University of Pisa are to be found in having delivered this vision to the attention of the national and international public. The 50 years of this degree course will, therefore, be a celebration of the past and present of computer science and above all an opportunity to indicate the future of the subject and our society in general.”

The founding fathers of the first degree course in Computer Science in Italy were two mathematicians from the University of Pisa, who established the course fifty years ago, in 1969: the then Rector, Alessandro Faedo, and Professor Gianfranco Capriz, at that time director of the Institute of Data Processing of the CNR. This date marks one of the fundamental steps of the digital revolution in our country and confirms the leading role the city of the Leaning Tower and Galileo Galilei have had in the history of computer science in Italy.

It was, in fact, in Pisa that the first Italian electronic calculator, the CEP (Calcolatrice Elettronica Pisana) was built. The CEP, designed by Enrico Fermi, was inaugurated by the President of the Republic Giovanni Gronchi in 1961. In 1969, in the wake of this project, the most important national centre of electronic calculus in the country (CNUCE), which later became part of the CNR, and the first Institute for Computer Science (ISI), forefathers of the present Department of Computer Science, were established. Along with these, of course, the first Italian degree course in Computer Science was founded and subsequently, in 1983, the first PhD course in Italy in Computer Science. In 1986, the first Internet connection in Italy was also made from Pisa, and this is the reason why the city still hosts the register of national domains .it.

In this brief history, the University of Pisa has held and continues to hold a leading role. From the 90s, in addition to investing in teaching and research, it has, in fact, contributed significantly to communication networks: firstly, with the development of the metropolitan network of Pisa (which has now been extended as far as Livorno), serving around 100,000 users; then by contributing to the creation of the national ultra-broadband network  dedicated to the teaching and research community (GARR); and more recently, with the creation of the Data Center infrastructure which is essential for dealing with research in all fields nowadays.

In the 90s, inside the area of the old slaughterhouse (ex Macelli), the University of Pisa – in agreement with Pisa City Council – opened the Museum of Computing Machinery, where it is possible to see the CEP as well as an extensive collection of machinery linked to the history of computing and computer science. It is an area where it is possible to understand the technological revolutions which have led to our way of life today.