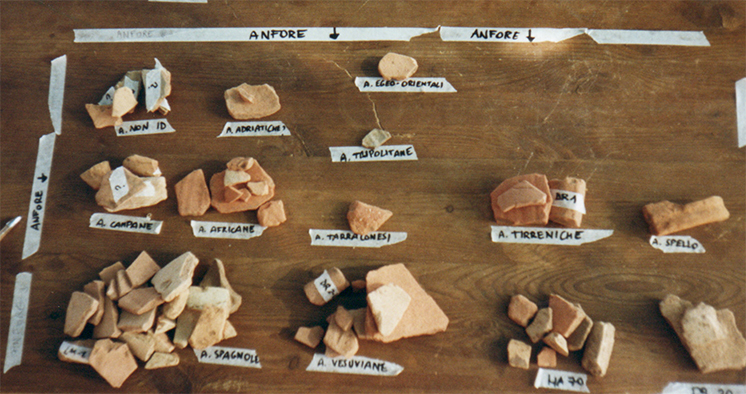 ArchAIDE, Archaeological Automatic Interpretation and Documentation of cEramics, the European project Horizon 2020 aims to revolutionize the work of archeologists with innovative computer-based tools. The project has been awarded to the University of Pisa who will head an International consortium with funds totaling 2 million 460 thousand euros. More precisely, ArchAIDE aims to create a prototype capable of facilitating and speeding up the work of archeologists in the classification of potsherds, which are of fundamental importance in the comprehension and dating of archeological contexts and in the understanding of commercial flows and social interaction in the past.

“The classification of ancient pottery requires complex competences today, given the level of specialization reached in this specific field by archeological studies over the last century. It is extremely time-consuming work also because it must be carried out directly in the excavation area, far from libraries,” explains Professor Letizia Gualandi from the University of Pisa, coordinator of the project. “The idea, therefore, is to offer support to archeologists by means of technological tools, in order to reduce time and costs, and improve access, re-use and exploitation of the heritage in a sustainable manner.”

During the three years of the project, which will begin on 1 April, an app for mobile devices will be developed. This app will be capable of recognizing and classifying even the most fragmented potsherds based on photographic images thanks to a simple interface and efficient algorithms for the characterization, search and retrieval of the visual and geometrical correspondences. By sending the photos of the potsherd using a smartphone or tablet to a database containing information on all the various types of pottery in use in antiquity, it will be possible to identify the find, or at the very least to offer a series of indications of a possible identification, and the area of distribution of the findings: all of this rapidly and anywhere in the world. The system will also be able to update itself, as each new entry will automatically increase the database. In other words, the objective is to create a sort of electronic identity card of each potsherd, which allows for the visualization of the data in real-time and the creation of an open archive where the data can become common heritage.

“At the end of the project,” concludes Letizia Gualandi, “an initial nucleus of the database will be established by digitalizing the existing paper-based catalogues of some ceramic classes which because of their formal, chronological and geographical characteristics are best suited to test the prototype. Our objective is in fact to create an archive valid for the entire ancient world, which can be used by any researcher, academic, or enthusiast wherever they are. A website created ad hoc at the outset of the project will allow everyone to follow the research at each stage.”