He was one of the founders of Econometrics in Italy 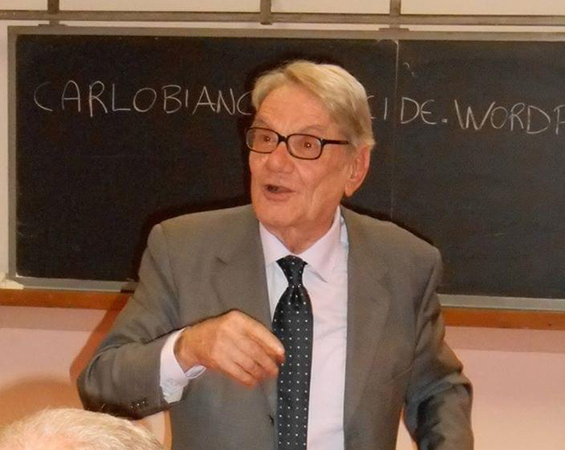 On August 4, 2020, Carlo Bianchi, former professor of econometrics at our University passed away

He was born in Carrara on October 29, 1943; he was an alumnus of the Scuola Superiore Sant'Anna and he graduated with high honors and distinction in Economics in 1969.

The scientific experience of Carlo Bianchi originated and consolidated within the econometrics team at the IBM Scientific Center in Pisa, especially in the years at the end of the 1970s and the beginning of the 1980s. From that position, until 1992, he managed to serve the dual purpose of introducing the most advanced econometric topics to an Italian audience and to give seminal contributions in a number of publications (notably, on Econometrica and the Journal of Econometrics).

From those years, date his more relevant articles related to the construction and use of econometric multi-equation models, with special reference to nonlinear models in variables and parameters. When one talks about estimation methods or simulation and model validation, stochastic simulation, decomposition of forecast errors in linear and nonlinear econometric models, one is bound to cross Carlo Bianchi's early contributions. More recently he studied statistical methods in the estimation of financial econometric models, indirect statistical inference, dynamic microsimulation models (construction, simulation, and validation) to be used for the analysis of social policies, and multiple-agent models to explore socio-economic systems dynamics.

During the past 40 years, Carlo Bianchi was an important presence on the academic international scene, participating in prestigious research groups (above all, Project LINK coordinated by the late Nobel laureate Lawrence Klein), contributing to the organization of international conferences. He also collaborated with the Research Unit of the Bank of Italy, between 1988 and 1992 to fine-tune methods and instruments to estimate and validate large-scale econometric models. He was President of the Società Italiana di Econometria-Italian Econometric Association between 2017 and 2018.

His distinguished signature plate was how he managed the CIDE Summer School of Econometrics in Bertinoro: under his supervision, between 1995 and 2015, the School has become a reference point at the international level, to the point that most distinguished scholars in econometrics (among whom many Nobel laureates) came forward to be part of once in a lifetime experience: lecture time was followed by unforgettable evenings animated by Carlo, in which he gave the students access to a backstage where the style of academic life was shown by remarkable examples. Many important books were originated as lecture notes that Carlo asked the instructors to compile especially for the Summer School.

His academic life was spent at the University of Pisa: an associate professor in 1992 and then a full professor of econometrics since 2000 at the Department of Economics, teaching various econometrics courses and coordinating the local Doctoral Program. In Pisa, and beyond, his lectures have formed generations of econometricians and applied economists. To the rigor of his approach to the discipline, Carlo added an ethical tension about how you should behave in life and how interpersonal relationships should be run. He liked the life of a class because his classes went beyond the walls of a classroom. At the end of a lecture, there always was a conversation to be continued. We, students and colleagues are left, next to enormous intellectual debt, with the memory of a passionate scholar and a great Maestro.